The Marais Poitevin is a sensitive ecological system of a rare richness. It is a maze of moats that intersect and intertwine between cultivable land and lush green dykes, offering a host of different landscapes, all linked together by the man-made canals. In South Vendée Atlantic, there are three different types of marsh landscape: the maritime marsh, the dry marsh and the wet marsh. Overview...

The Marais Poitevin is located on the former marine gulf, the Golfe des Pictons. This classified, protected site is the second largest wetland in France. The ocean has partially withdrawn over time and the area has been shaped by man. It has filled with sediment, forming a vast wilderness covering approximately 112,000 hectares. It is home to a remarkable diversity of wildlife which can be observed from the many observation points that have been installed. This immense green stage offers a whole diversity of outdoor activities: punting, fishing, hiking, cycling, tours of cultural and architectural heritage sites, water activities, etc.. Many ways to immerse yourself in this magical universe.

The Golfe des Pictons is the name of an ancient gulf on the Atlantic ocean. It was situated in what are now the departments of Charente-Maritime, Deux-Sèvres and Vendée. We’re talking about the year 8000 BC. To give you an idea, Saint-Michel-en-l’Herm and Chaillé-les-Marais were islands, and the Pointe de l’Aiguillon didn’t exist. Likewise, the ocean covered everything up to the city of Niort. That’s the “gulf” part of the name explained.

As for “Pictons”, the term refers to a Scottish tribe. They settled on the gulf’s limestone islands in 700 BC. It was only in the Middle Ages that land began to emerge in the gulf. First through a natural sedimentation process, then by the actions of men who used dykes and backfill to drain the land and make the sea retreat. This process is called polderisation. Little by little, the Golfe des Pictons gave way to the Marais Poitevin ecosystem. Today, the Baie de l’Aiguillon is all that remains of the gulf! 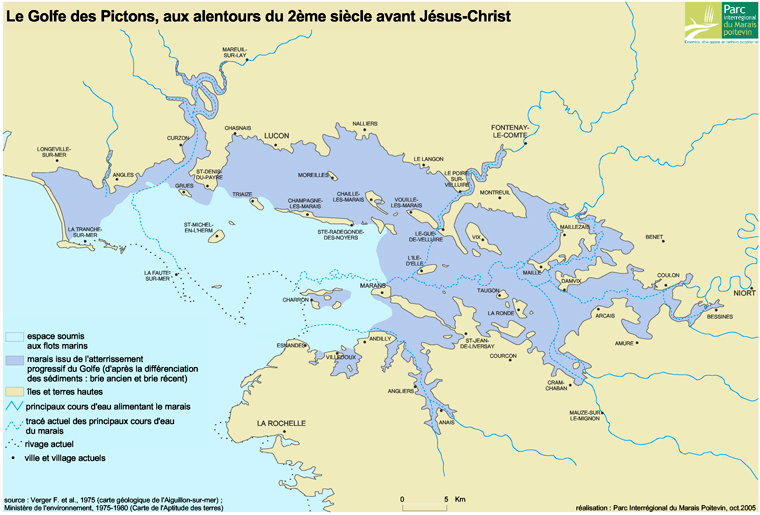 In the Marais Poitevin, water makes its way from the upstream catchment basin to the Baie de l’Aiguillon and the Pertuis Breton strait located downstream. Between these two sites, the emblematic landscape of the Green Venice wet marsh and the dry marsh area that never floods form a captivating landscape.

The maritime part concerns only the Baie de l’Aiguillon. The bay is all that’s left of the Golfe des Pictons. Today, this system is a classified national nature reserve. Which means that its riches can be protected, managed, and shown to the public at large. The area comprises salt marshes (called “mizottes”), mudflats and dunes. The tidal influence makes it a constantly changing system.

Together with the Baie de l’Aiguillon and the Belle Henriette lagoon, the Pointe d’Arçay is one of the great natural sites on the South Vendée shoreline. That is to say, sites with a high environmental capital! To discover the incredible biodiversity of this site, contact the Office National des Forêts (ONF) or the Office National de la Chasse et de la Faune Sauvage (ONCFS). Join their free guided tours in July and August! You can also discover some exceptional specimens from the Rade d’Amour or even from the sea by taking a boat or a canoe around the Pointe.

The dry marsh is the former coastal area that is now dry. Due partly to a natural sedimentation process in the gulf, but also to a clever hydraulic system designed by man to regulate the passage of water. This part of the Marais Poitevin is therefore protected from flooding by the seafront embankment and a whole network of dykes and high points such as the limestone islands. The dry marsh offers vast landscapes of prairies and cultivated areas surrounded by a great number of ditches and canals.

Thanks to hydraulic structures involving sluice gates, valves, locks and plugs, the intervention of man made the marsh dry up faster. The embankment managers played a crucial role in water management and marshland maintenance. So this hydraulic heritage comes hand in hand with the Marais Poitevin and its features are dotted all over the region. You can have fun counting them while you’re visiting!

This wetland is undeniably the most well-known part of the Marais Poitevin. Just hearing the words “Green Venice” conjures images of punting through the landscape in the partial shade of the dense greenery that lines the canals! But “Green Venice” is only part of the wet marsh’s story.

In South Vendée Atlantic, the wetlands include the municipal marsh and the flood plains! All of this is linked together by mile upon mile of ditches, drains and canals dug by man. Thus, the canals can be used to travel and the water can be drained off for the benefit of crops!

These are vast natural flood plains. They are used as communal grazing land for herds. They also provide food and shelter for migratory birds. Some of them stretch across 300 hectares. Remaining traces of the passage of rivers and the ocean are visible in the form of hollows, known as “baisses” and higher areas, called “belles”.

There are three places where you can embark on an adventure in the maze of the wet marsh: Le Gué-de-Velluire, Mareuil-sur-Lay-Dissais, and Triaize. All three sites propose rentals of punts, canoes and pedaloes. So choose your vessel, put on your lifejacket, place your snack in the waterproof container, and off you go…

To find out more…

At Chaillé-les-Marais, the Maison du Maître de Digues (Dike supervisor museum) invites you to discover the life of Frédéric, from the Collardeau family who were dyke supervisors from father to son virtually throughout the 19th century. It was in the heart of the dry marsh that the embankment supervisor operated before water management was automated. He was in charge of ensuring that the canals, bridges and locks were kept in a good state of repair. He alone represented the determination of those generations of men who, through the centuries, fought to tame the waters and overcome nature. The dike supervisor’s role was a tricky one that required in-depth knowledge of the region and unquestionable authority to settle the frequent disputes between the “marouins” (dry marsh inhabitants) and the “maraîchins” (wet marsh residents).

The ecomuseum opens the doors to the dike supervisor’s official accommodation. Discover the living conditions, profession and daily life of Frédéric Collardeau! With a costumed guide and wearing ancient headdresses, children have fun as they learn about the dyke supervisor’s lifestyle… Take the time to see how the dyke changes through the seasons, and listen to the marshland sounds. Total immersion!

BALUDIK – LOOKING FOR THE MISSING BELL…

VIEW POINT OF THE VACHERIE MARSH

Buckle - ROSNAY
1 h
BALUDIK – BECOME THE MASTER OF THE DYKES!

BALUDIK – BECOME THE MASTER OF THE DYKES!

LUCON
HIKE “AROUND THE MOAT” See the route

HIKE “AROUND THE MOAT”

BALUDIK – MOULINETTE THE BOUCHOT MUSSEL GOES ON AN ADVENTURE

Marais poitevin, travelling back in time

Marais poitevin, travelling back in time